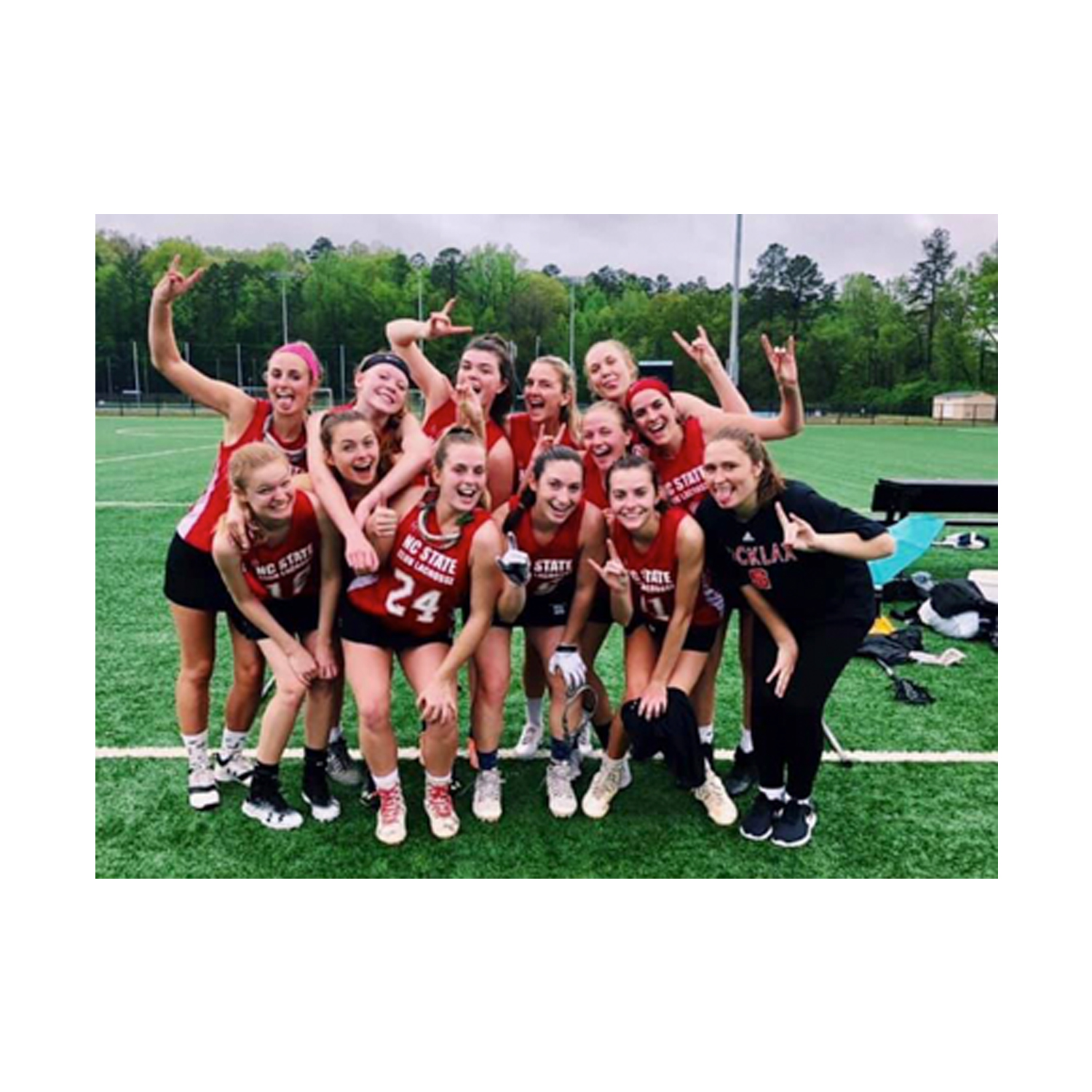 Emily’s Background:             Emily Hayes is on the woman’s club lacrosse team. She is a sophomore at NCSU studying Economics. Emily has previously coached the...

On a sunny Saturday at Lower Method Field, it was evident that the sun was shining down on the Wolfpack. NC State took an early... 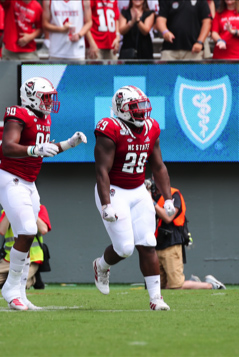 One On One – Alim McNeill

By Brandon Hasbrouck (Raleigh, NC) The Icepack (21-3-0) faced off Friday night versus the UNC-Wilmington Seahawks for the second time this season. In the first...

RALEIGH – At J.W Isenhour Tennis Center on April 7, 2019 #10 NC State hosted the Winthrop Eagles. This is their second match off the...

RALEIGH, NC (April 6, 2019) — NC State Softball was back on the diamond at Dail Softball Stadium Saturday afternoon shortly after their 5-2 defeat...

Clutch hitting leads Softball to a 4-2 win over Winthrop

The Wolfpack softball team came up short, 5 – 3 in a battle under the sun with Syracuse in yesterday’s series finale beginning at noon...

NC State (No. 10) goes head to head with Florida State (No. 13) on Senior Day and experiences their first loss in months. The Wolfpack...

Clutch hitting leads Softball to a 4-2 win over Winthrop

On Friday, March 29th, at the J.W. Isenhour Tennis Center, the Men’s tennis team battled hard against the Florida State Seminoles, resulting in a 4-1...

Wolfpack Softball Ends Six-Game Skid With A Win Against Seahawks

In Wednesday’s game against the UNC Wilmington Seahawks, the NC State Wolfpack prevailed at Curtis & Jacqueline Dail Stadium in Raleigh, North Carolina with a...

TEMPE, Ariz. – The NC State women’s tennis team checks in at No. 10 in the Oracle/ITA Division I Rankings, as announced Tuesday. The ranking...

Pack Baseball Keeping It Clean After A Weekend Sweep Against Miami

In last night’s baseball game against The Elon Phoenix, the #5 NC State Wolfpack had yet again another successful night under the lights on Doak...

It was a windy afternoon at the J.W. Isenhour Tennis Center as the Wolfpack took on their ACC rivals, the Miami Hurricanes. The #12 Wolfpack...

Pack Bats Down Towson to Move to 20-1

In a game where NC State found itself down three or more runs two separate times, the Wolfpack once again found a way to win...

The NC State Baseball team opened up their 2019 season at home, in Doak Field against Bucknell, February 15th. Coming into the game the Wolfpack...

By Kaylee Brooks The ACC Big 10 Final game was held on Sunday, February 17, 2019 at Dail Stadium in RALEIGH, NC, between the NC...

By Leigha Bruce Ranked no. 21 NC State baseball swept Bucknell in its opening series at Doak Field, ending the weekend on a 12-8 win.... 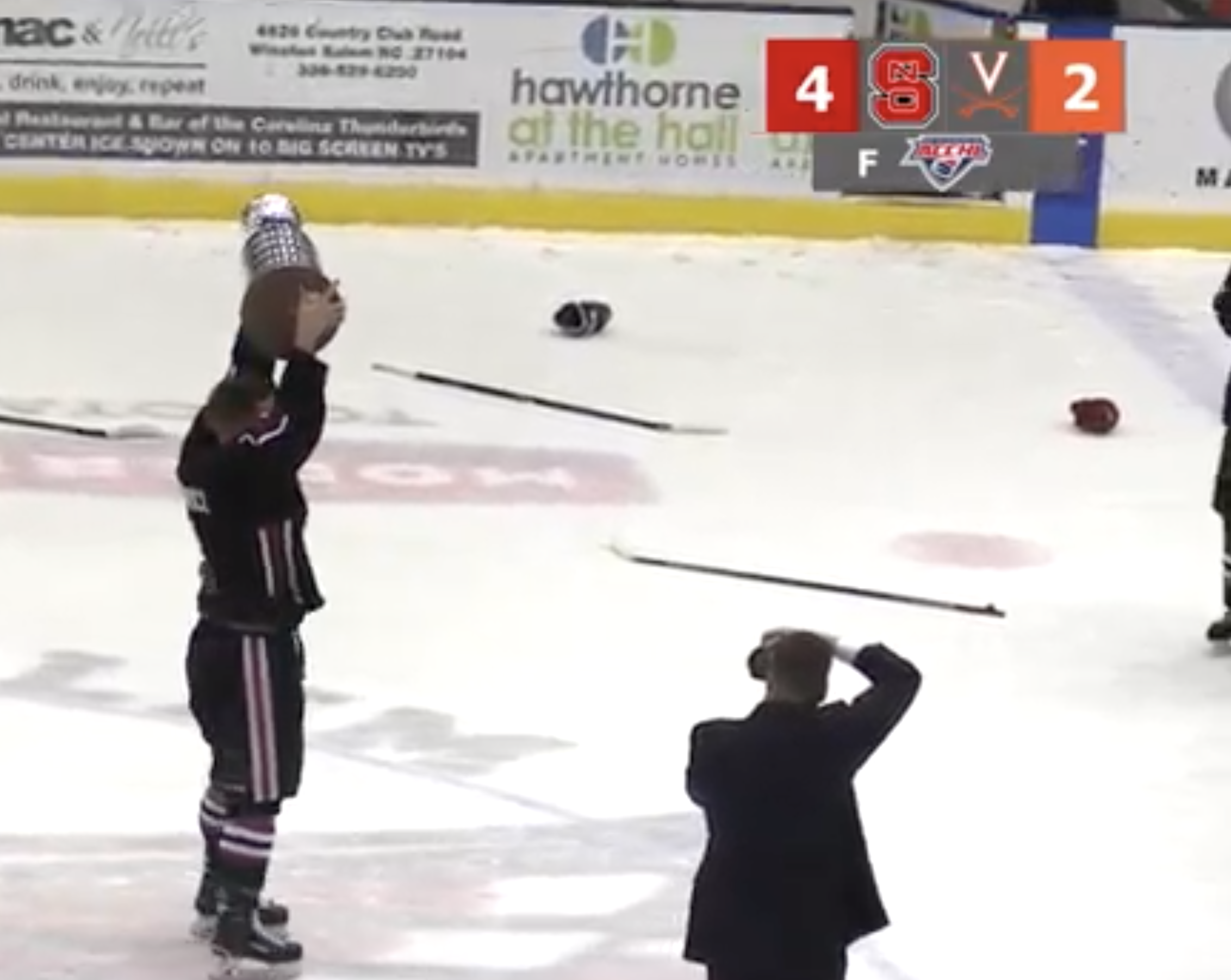 By Logan Ward On a rainy Sunday afternoon at the Winston-Salem Fairgrounds Annex, the still undefeated NC State Icepack take on the Virginia Cavaliers in...

By Will Thornhill The NC State Baseball team opened up their 2019 season at home, in Doak Field against Bucknell, February 15th. Coming into the...

The NC State Icepack were scheduled to play Clemson tonight for their final regular season home game but the Tigers forfeited the match.  Instead the...

Softball gets ready to start season

By Lizzie Hattrich The NC State softball team is set to open its season this weekend in Tampa, Fla., at the USF Opening Weekend Invitational....

By Brendan Seppey Friday night at the Raleigh iceplex, the undefeated NC State Icepack take on the Duke Blue Devils in their second meeting of...

Swimming and Diving Dominates Over UVa

Two of the best teams in the ACC went head to head to wrap up the Atlantic Coast Conference (ACC) dual meet season. The Wolfpack... 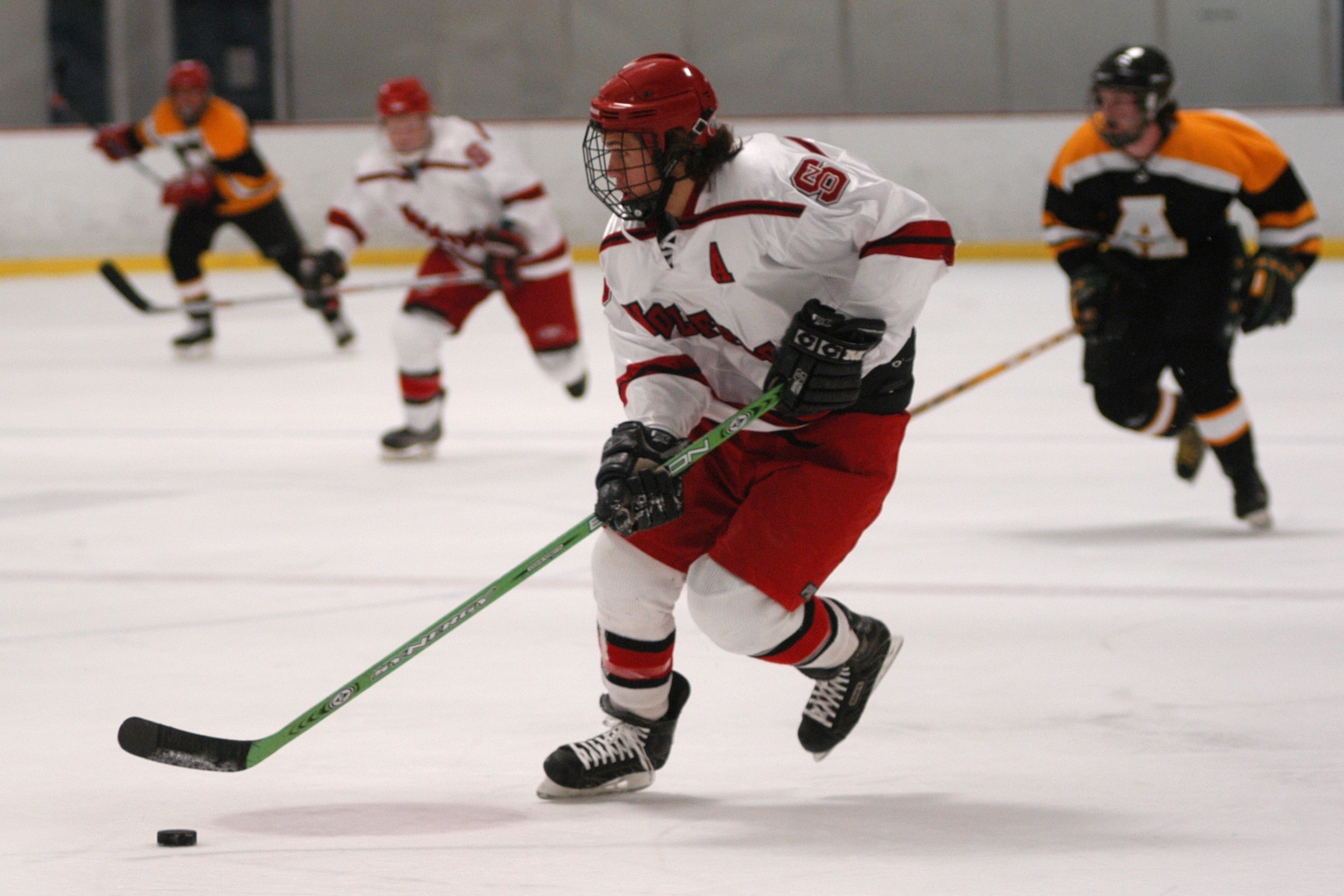 The NC State Ice Pack battled it out with their rival, the UNC Tar Heels, in the third and final Backyard Brawl of the season on Wednesday, January 23rd. 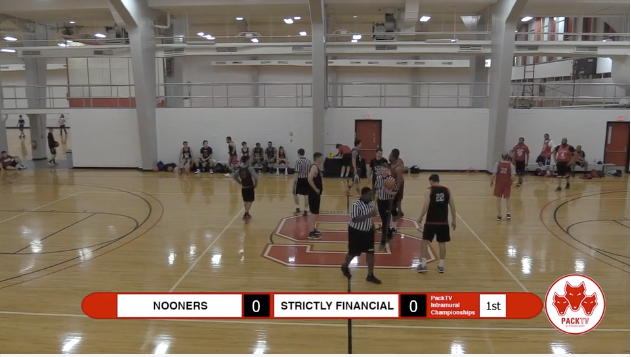 On a special night in Reynolds Coliseum the Wolfpack gave the packed house a show in all facets of the game. NC State started off a little cold from the field, but picked it up on the defensive end of the floor to cause turnovers and get easy buckets in rout to a 100-67 win. 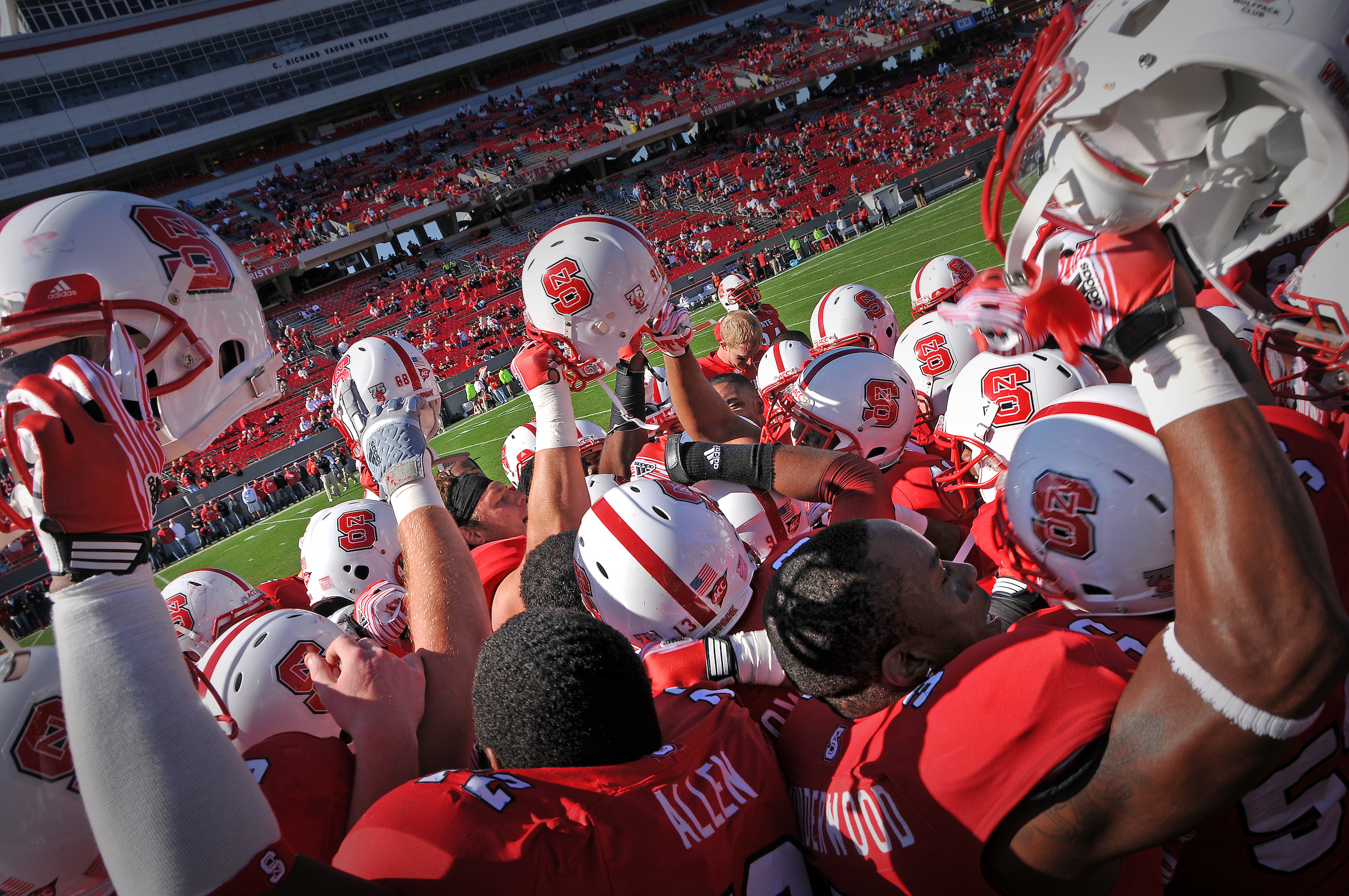 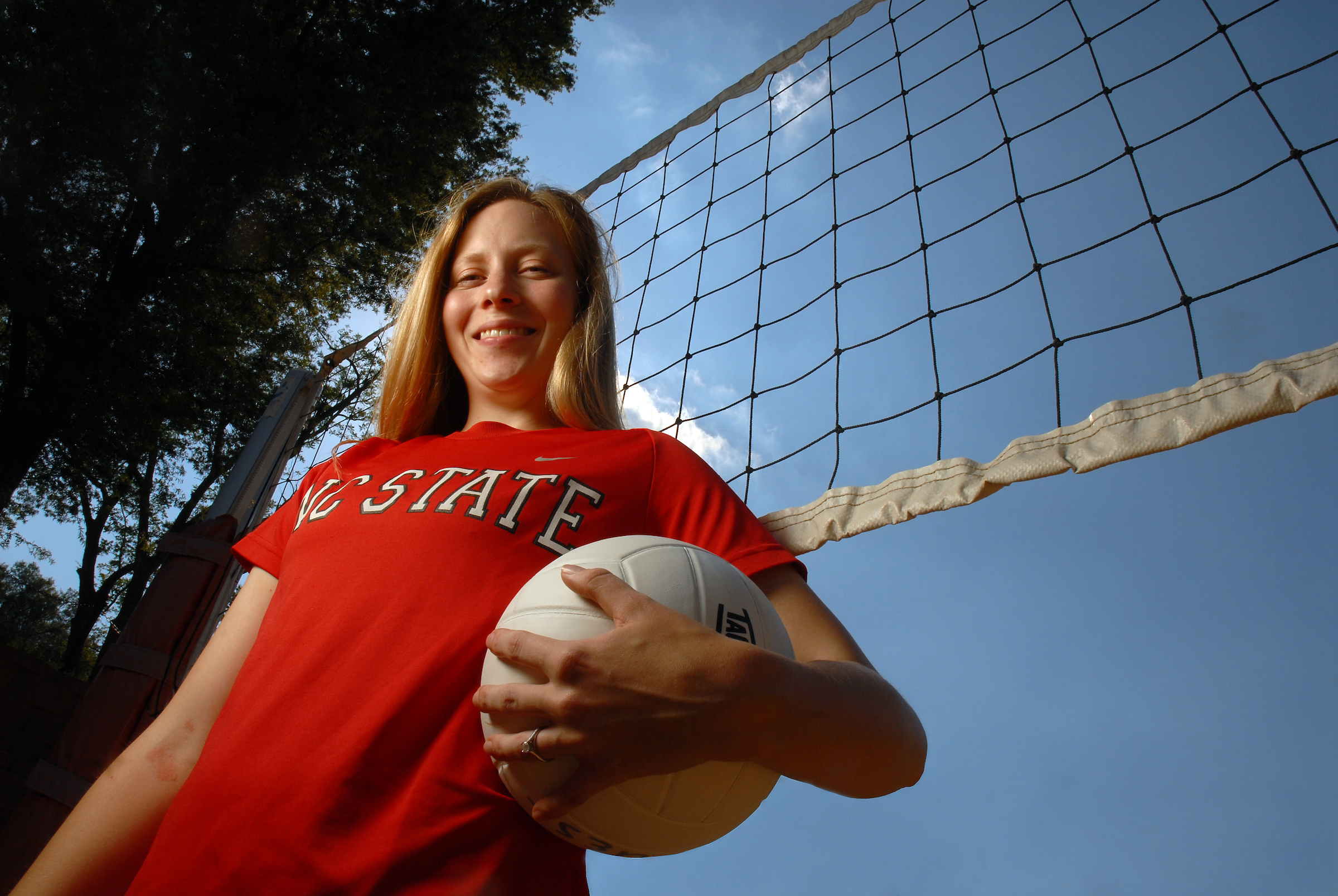 The NC State Wolfpack ladies hosted the Florida State Seminoles at Reynolds Coliseum for a thrilling matchup between the two ACC rivals. Coming into this...

The NC State Men’s Basketball Team improved to 5-0 after defeating the Saint Peter’s Peacocks by the final score of 85-57. The Peacocks began the...

The 3-10 Tar Heels hosted Josh Cannon and the perfect 13-0 #6 Wolfpack Monday night at PNC Arena for the Governor’s Cup. Chapel Hill may...

Devastating loss on the way to Nationals: Women’s Club Soccer

After an incredible second-place finish at Regionals, the women’s club soccer team is on their way to the NIRSA National Soccer Championship in Foley, Alabama....

Queens Proves to be too much for NC State Rugby

On a cold windy night at Upper Method Field, the Queens University Women’s Rugby team proved exactly why they were 8-0 going into tonight’s contest....

NC State Volleyball took on UNC Chapel Hill at Reynolds Coliseum on Wednesday at 7pm. With the home advantage, the Pack won the first three...

In the third group stage matchup in Group A of the Raleigh Ramble, the North Carolina State Wolfpack defeated the Wake Forest Demon Deacons by...

“To earn two-five set matches at home this weekend after being on the road for so long is awesome, it was a good weekend.” Says...

In the inter-conference matchup between the defending ACC Champions Charlotte 49ers and the North Carolina State Wolfpack, two early goals for the ice pack allowed...

Wolfpack Clash with Virginia Tech in ACC Tourney First Round

RALEIGH – With the end of the season fast approaching and championship dreams flying through the mind of every player across the country, it’s no...

The NC State Men’s Club Basketball team competed in the annual Battle of the Brickyard Tournament this weekend. The tournament consists of many regular ACC...

On October 27-28, North Carolina State University Men’s Club Basketball is hosting the Battle of the Brickyard basketball tournament. With 16 teams competing from three...

The NC State Wolfpack women’s volleyball team lost their Sunday televised match against the undefeated University of Pittsburgh by a score of three sets to...

The story for the IcePack this season is a story of success, and tonight’s game was no exception. Coming into the game, the IcePack was...

The NC State women’s soccer team suffered a 2-1 loss on Sunday afternoon to the Louisville Cardinals at Dail Soccer Stadium in Raleigh, NC. The...

CLEMSON – The No. 3/3 Clemson football team emerged victorious in the battle of unbeatens at Memorial Stadium on Saturday afternoon, defeating the No. 16/15...

After coming off of a huge win against #1 University of North Carolina earlier in the season the NC State Men’s Soccer team was hungry...

A strong third period performance led by none other than Sam Banasiewicz propelled the IcePack to a 6-0 win over the UNCW Seahawks.  Up by...

In their annual alumni Rugby game, the current club Rugby team welcomed back the Alumni with a kickball game. This is an annual event put...

With both teams coming off of ties from their last games, the Wolfpack and Hurricanes were on a mission for a W. Only one goal...

Coming of an 18-0 victory against UNC Wilmington in 10 innings the Wolfpack were looking to finish their last fall home game with a victory....

Pack Volleyball Look to Bounce Back in ACC Play

RALEIGH – The NC State Volleyball team took on the Virginia Cavaliers in an ACC matchup at Reynolds Coliseum. The team returns home after a...

NC State Softball kicked off their home fall ball season Sunday afternoon at the Curtis & Jacqueline Dail Stadium with a double header against the...

RALEIGH – It felt like spring in October as the lady Wolfpack continued their fall softball session at Dail Softball Stadium on Sunday, October 7....

RALEIGH – Over the course of a match with little offensive production from the Wolfpack, goalkeeper Leon Krapf shined with 4 saves that helped the...

NC State Men’s Soccer Rallies Late for an Overtime Tie Against #6 Louisville RALEIGH – Coming off of a loss to Pittsburgh on September 25th,...

RALEIGH – Tonight, the IcePack faced off against the Iceheels in PNC Arena in their very own Backyard Brawl, competing for the first annual Governor’s...

RALEIGH – As the crowd began to file into PNC Arena for the 2nd Annual Backyard Brawl and the first Governor’s Cup, it did not...

RALEIGH – It was a big night as 6,000 fans packed the PNC Arena to watch Wolfpack Hockey take on the UNC Tar Heels in...

Wolfpack Battle to a Draw Against In-State Rivals

RALEIGH – The Wolfpack took on the University of North Carolina Tar Heels in their final game of the season Saturday morning. Both sides were...

Rapid Start in the Raleigh Rumble

Another Win for Lady Soccer Pack

RALEIGH –  Today the Women’s soccer team took on Pittsburgh at 1:00pm at Dail Soccer Stadium. The Wolfpack went into this game with a record...

RALEIGH – In-state rivals NC State and UNCC met in Raleigh for an offensive show case on Friday night. In a game that NCSU had...

RALEIGH – Tonight, the NC State women’s volleyball team took on the Clemson Tigers in historic Reynolds Coliseum at 7pm.  The Wolfpack won in 4...

RALEIGH – At home in Reynolds Coliseum, the NC State Women’s Volleyball team comes into an ACC showdown versus the Clemson Tigers red hot. They...

RALEIGH – It was another weekend of success for the NC State women’s volleyball team with a sweep of sets against the Boston College Eagles....

RALEIGH – It was senior day for the Wolfpack as they took on rival and in-conference foe Boston College at Dail Soccer Stadium. The drama...

RALEIGH – Tonight, as the Wolfpack says goodbye to the conference season, they took on the Louisville Cardinals at home. This was the Wolfpack’s last...

The Pack Downs the Cardinals

RALEIGH – Though starting off slow, the Wolfpack women’s soccer team remained calm, hustled hard, and conquered the 2-1 victory over Louisville sending them to...

RALEIGH – There was not a cloud in the sky but you wouldn’t have known that if you were at Dail stadium tonight because looking...

RALEIGH – Tonight the men’s soccer team of North Carolina State University got into a battle with the UNCW Seahawks. The spectacle took place at...

Pink is the New Red

RALEIGH – The NCSU Women’s Volleyball team looks to continue their 7-0 conference winning streak as they take on the Virginia Tech Hokies (Sunday, October...

Make That 10 for the Pack in Shutout Fashion

RALEIGH – In honor of breast cancer awareness month, the pink found in the jerseys of the North Carolina State’s soccer appeared to do nothing...

RALEIGH – NC State came into today’s conference matchup against the Duke Blue Devils on a six game win streak with three of those games...

Wolfpack Storm Past Hokies in First Game of Memorial Tournament

RALEIGH – NC State’s strong play on the ice against Virginia Tech added to what has proved to ban eventful and successful weekend in the...

The Pack Outlasts the Tarheels in Wolfpack Intercollegiate

RALEIGH – Fresh off a big win in Cedar Rapids, Iowa at the Golfweek Conference Challenge, the Wolfpack Men’s Golf team came out firing once...

Wolfpack Handles Business Versus the Bruins

RALEIGH – On an early October night in Raleigh the Pack could not seem to find the net in the first half, but that all...

RALEIGH – Action kicked off at Lonnie Poole golf course at 8:30am Monday morning for the Wolfpack Intercollegiate golf tournament. North Carolina State and the...

RALEIGH – The NC State Men’s Rugby team started their season off strong with a huge win. In today’s matchup with the Radford Highlanders, the...

RALEIGH – On September 24, the NC State Wolfpack volleyball team took on the likely ranked no. 27 Fighting Irish from Notre Dame. This nail...

RALEIGH – Rewind back to last Friday, when NC State midfielder Julius Duchscherer scored the fastest goal in program history, which came at the 00:14...

PacKTV: Taking You Into The Pack!